Shadow squad is an elite ARC trooper unit that was trained by Cpt. Zenor Verdo, he liked the group so much he became their commanding officer. Shadow squad has been on numerous missions such as hostage rescue, anti terror, and black ops.

All equipment shared between the group:

They have control of the following ships from the 1st Republic Fleet: 1 of 2 Eclipse-Class super star destroyers, 1 of 3 Pelta-Class frigates, 1 moddded Acclamator II, 1 of 4 Dreadnought-calls heavy cruisers, and 1 of 3 Acclamator I-Class assault ship.

6 modified Rogue-class starfighters each has 1 pilot, and is armed with repeating laser cannons, proton torpedo launchers, and advanced cloaking technology.

Base D-55 on dantooine. All republic weapons and gear are available to the squad.

All of them have Thermal detonators, Medkits, Comlink/Holoprojectors built into one of their gloves, Macro binoculars, flare gun with 3 flares, ration packs, and a grappling kit. 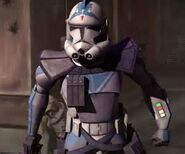 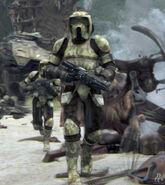 Base D-55 on dantooine

Firespray-31
Add a photo to this gallery
Retrieved from "https://clone-wars.fandom.com/wiki/Shadow_squad?oldid=259"
Community content is available under CC-BY-SA unless otherwise noted.