Logan was born on mandalore and trained in their old warrior culture since birth. At age 16 he built his own armor and passed his trials to become the head of his clan, but declined and decided to become a mercenary instead. During his trials he traveled to Correllia and met a young Zenor Verdo who explains his parents were killed during a Death watch attack, taking pity on him  Logan brings him back with him and treated him like his brother. Several years later he went to Kuat Drive Yards and acquired a Firespray-31-Class patrol ship. He later ran into Cyn Goldonbur on Malastare whom he brought to Courascant on his request, He then met Palpatine and remembered seeing him on Mandalore when he killed Darth Maul and recognized him as the Sith Lord and executed him. 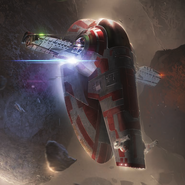 Add a photo to this gallery
Retrieved from "https://clone-wars.fandom.com/wiki/Logan_Foster?oldid=296"
Community content is available under CC-BY-SA unless otherwise noted.